This paper presents a novel indoor topological localization method based on mobile phone videos. Conventional methods suffer from indoor dynamic environmental changes and scene ambiguity. The proposed Visual Landmark Sequence-based Indoor Localization (VLSIL) method is capable of addressing problems by taking steady indoor objects as landmarks. Unlike many feature or appearance matching-based localization methods, our method utilizes highly abstracted landmark sematic information to represent locations and thus is invariant to illumination changes, temporal variations, and occlusions. We match consistently detected landmarks against the topological map based on the occurrence order in the videos. The proposed approach contains two components: a convolutional neural network (CNN)-based landmark detector and a topological matching algorithm. The proposed detector is capable of reliably and accurately detecting landmarks. The other part is the matching algorithm built on the second order hidden Markov model and it can successfully handle the environmental ambiguity by fusing sematic and connectivity information of landmarks. To evaluate the method, we conduct extensive experiments on the real world dataset collected in two indoor environments, and the results show that our deep neural network-based indoor landmark detector accurately detects all landmarks and is expected to be utilized in similar environments without retraining and that VLSIL can effectively localize indoor landmarks. 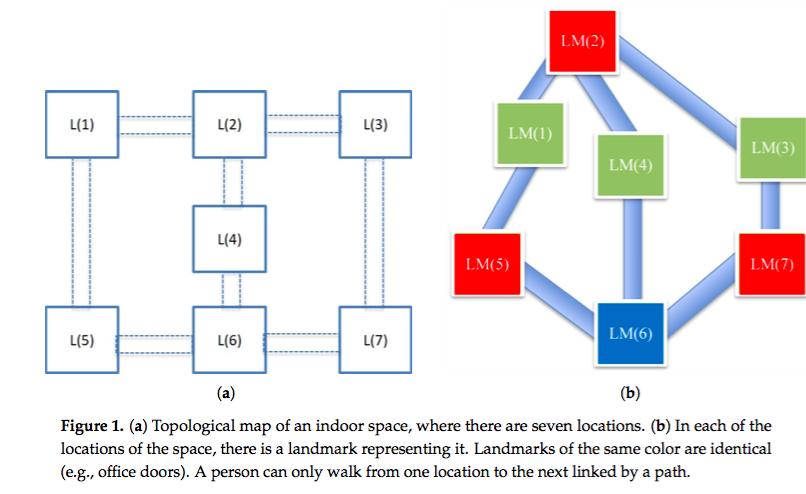 We propose a novel visual landmark sequence-based indoor localization (VLSIL) framework, and we first illustrate its basic idea. Suppose there is an indoor space that has seven locations as shown in Figure 1a. For each location, there is a landmark representing it as shown in Figure 1b and the color indicates the landmark type. Pedestrians can only walk from one location to the others linked by a path. Suppose pedestrians reach the location L(2) without knowing it and observe the red landmark. Their locations cannot be determined since there is more than one location denoted by the red landmark (e.g., LM(5) and LM(7)). Suppose pedestrians observe red, green, and blue landmarks in sequence in their path. They can be sure they start from LM(2), go through LM(4), and arrive at LM(6), because LM(2), LM(4), and LM(6) are the only valid path. The VLSIL achieves localization through taking photos (video) of a location to determine the current position by matching a sequence of previously discovered landmarks against the topological map of the space.

In this paper, we propose a robust landmark representation using sematic information. A CNN-based landmark detector is proposed to determine landmark type. Unlike previous approaches using handcrafted features, our detector learns the distinctive features to distinguish target objects and background. Moreover, it can be used for off-the-shelf scenes without changing. The learned features are not derived from a single space but from a combination of color, gradients, and geometric space. With a proper training dataset, it stays robust to landmark variations caused by illumination and other deformations. CNN was selected due to its high performance in image classification [22] and indoor scene recognition [23] and outperforms approaches based on handcrafted features.

Our method correctly detected all landmarks in all routes. The ANN-based detector correctly detected landmarks in Route 2 and Route 3. Some walls were wrongly detected as doors in Routes 3, 5, 6, and 7. This demonstrates that our detector outperforms the detector using handcrafted features. Currently, the proposed method cannot be achieved in real time. The majority of time is spent on landmark detection. Although the average time of classifying an image is short using our convolutional neural network (about 0.012 s on our machine), the average time to process a landmark image is about7 s. The process is time-consuming for two reasons. Firstly, we choose an effective selective search algorithm to generate patches from landmark images, which costs about 3–4 s to generate reliable patches. Secondly, we feed 300 patches of a landmark image to the network to correctly detect landmarks, which takes an extra 3 s. It should be noted that the detection process can be optimized with the development of object detection technologies in computer vision.

We further draw comparisons with the HMM-based method in two situations, and the statistical results are shown in Table 5. The number of possible paths is used to report the comparison result. It is notable that the HMM fails to localize all landmark sequences without a known start and only Route 5 is accurately localized given the start position. In addition, our method outperforms the HMM-based method in seven routes with the same conditions.