6DOF camera relocalization is an important component of autonomous driving and navigation. Deep learning has recently emerged as a promising technique to tackle this problem. In this paper, we present a novel relative geometry-aware Siamese neural network to enhance the performance of deep learning- based methods through explicitly exploiting the relative geometry constraints between images. We perform multi-task learning and predict the absolute and relative poses simultaneously. We regularize the shared-weight twin networks in both the pose and feature domains to ensure that the estimated poses are globally as well as locally correct. We employ metric learning and design a novel adaptive metric distance loss to learn a feature that is capable of distinguishing poses of visually similar images from different locations. We evaluate the proposed method on public indoor and outdoor benchmarks and the experimental results demonstrate that our method can significantly improve localization performance. Furthermore, extensive ablation evaluations are conducted to demonstrate the effectiveness of different terms of the loss function.

Global Positioning System (GPS) has been widely used for vehicle localization but its accuracy significantly decreases in urban areas where tall buildings block or weaken its signals. Many image-based methods have been proposed to complement GPS. They provide position and orientation in- formation based either on image retrieval [1], [2], [3], [4], [5] or 3D model reconstruction [6]. However, these methods face many challenges, including high storage overheads, low computational efficiency and image variations, especially for large scenes.

Recently, rapid progress in machine learning, particularly deep learning, has produced a number of deep learning-based methods [7], [8], [9], [10], [11], [12], [13], [14], [15]. They have attained good performances in addressing the aforemen- tioned challenges but their accuracies are not as good as traditional methods. Another severe problem of deep learning- based methods is that they fail to distinguish two different locations that have similar objects or scenes.

In this paper, we present a novel relative geometry-aware Siamese neural network, which explicitly exploits the relative

geometry constraints between images to regularize the net- work. We improve the localization accuracy and enhance the ability of the network to distinguish locations with similar images. It is achieved with three key new ideas:

2) We perform multi-task learning to estimate the absolute and relative poses simultaneously to ensure that the predicted poses are correct both globally and locally.

3) We employ metric learning and design an adaptive metric distance loss to learn feature representations that are capable of distinguishing the poses of similar visual images of different locations thus improving the overall pose estimation accuracy. 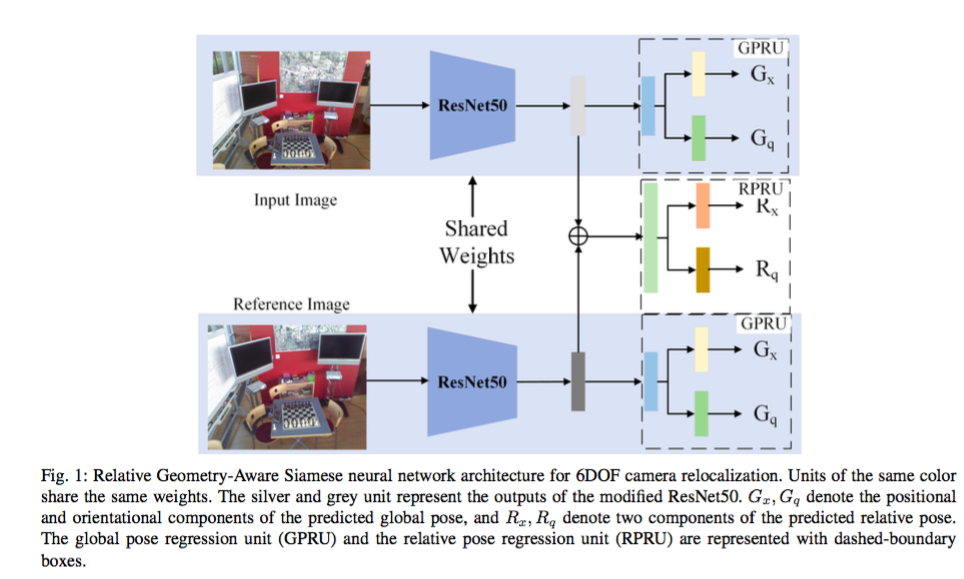 We compare the results of the proposed method with that of state-of-the-art deep learning-based methods such as PoseNet, Bayesian PoseNet, PoseNet2, Hourgrlass-net, LSTM-Net and RelNet on the 7Scene dataset, and with PoseNet, Bayesian PoseNet, PoseNet2 and LSTM-Net on the Cambridge Land- marks dataset. Similar to others, we report each scene’s median error. We also compare the average median accuracy over all scenes in each dataset. The comparative results are shown in Table I and Table II. Table I shows the results for the 7Scene dataset. It is seen that compared with 7 state-of-the-art deep learning-based camera relocalization methods, the proposed

method achieves the best performance on positional accuracy in all 7 scenes. Our method improves the average median positional accuracy by 16% over the best reported result. It is interesting to note that our method has obtained even better result than PoseNet2, which utilizes 3D reference as additional constraints.

For orientational accuracy, we achieve the best result com- pared to methods based on direct regression. It is not surprising that the results are not as good as PoseNet2 and RelNet since PoseNet2 requires additional 3D models and RelNet triangulates the pose with all referencing images by estimating the relative poses instead of directly regressing results.

Table II shows the results for the Cambridge Landmarks dataset. It can be seen that our method obtains the best positional accuracy on the KingsCollege and the ShopFacade scenes, reaching accuracies of 0.865m and 0.834m respec- tively. We improve the state-of-the-art orientational accuracy of the OldHospital and the StMarysChurch scenes from 3.29◦ and 3.32◦ to 2.42◦ and 2.98◦, achieving 26% and 10% improvement respectively. The average positional accuracy over all scenes is improved from 1.30m to 1.24m. The average orientational accuracy over all scenes is only a little worse than that of PoseNet2, which is trained with 3D model constraints.

[26] A.Guzman-Rivera,P.Kohli,B.Glocker,J.Shotton,T.Sharp,A.Fitzgib- bon, and S. Izadi, “Multi-output learning for camera relocalization,” in Proceedings of the IEEE Conference on Computer Vision and Pattern Recognition, 2014, pp. 1114–1121.

[37] M.DonoserandD.Schmalstieg,“Discriminativefeature-to-pointmatching in image-based localization,” in Proceedings of the IEEE Conference on Computer Vision and Pattern Recognition, 2014, pp. 516–523.